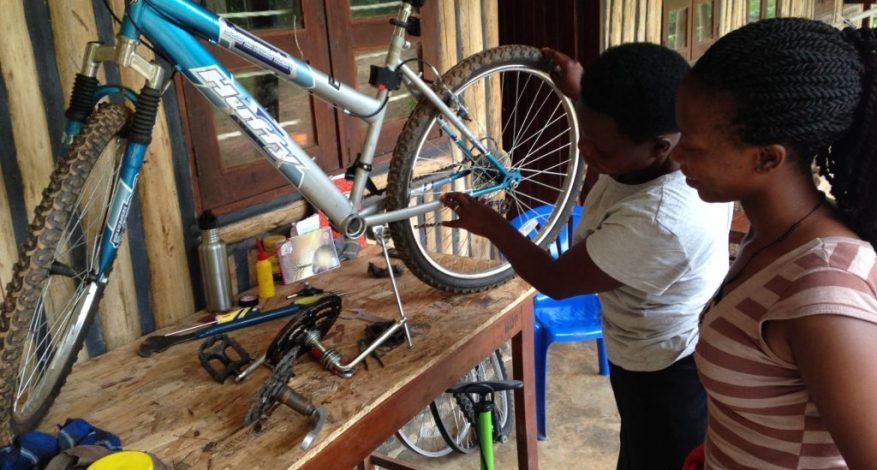 When the orupaanga touches the bretch pad on the buryo side, we can tighten the enuti empajye on the bumosho side with the spanner empajye, and that should pull the orupaanga back to the bumosho side. This operation can only be done a certain number of times until we run out of ehuzi ye’mpajye. In that way, each omupiira can only live for so long.

The dominant tribe in this area, and most of south west Uganda are the Bakiga, their language is Rukiga. The Bakiga are one of many tribes speaking one of hundreds of Bantu languages. I vaguely remember something about the Bantu expansion from an undergraduate anthropology course. The internet reminds me that they undertook a massive migration and population increase from an area in modern Cameroon, in a broad south east direction starting perhaps in 1000 BC and continuing to AD 500. Descendants of the Bantu expansion make up the largest ethno-linguistic group in Sub-Saharan Africa. Their migration brought them into contact with indigenous groups like the Batwa, here in Bwindi, and the Khoisan in South Africa. The Batwa, commonly known as Pygmies, have a troubled and seemingly enigmatic history in the area and will be a topic of a subsequent report. All the Mutwa (a Batwa individual) that I’ve met speak Rukiga, and varying levels of English comparable to the Mukiga.

dialect. The accent of Ugandan English is heavy and requires patience between both interlocutors. I’ve noticed that two children of American medical volunteers often address the Africans in what sounds to me like a heavy South African accent. The Africans told me that the children lubricate their words and they hear them quite clearly. I’ve yet to muster the audacity or drink enough waragi (banana moonshine) to affect a similar accent but I am considering it. If my wifi connection is strong enough unlikely I’ll re-watch Niel Blomkamp’s 2009 sci-fi film District 9 and maybe give it a try. Meanwhile, one of the most helpful things I’ve done in the bicycle mechanic training, is try and use Rukiga nouns for the bicycle parts. It is much better than using English terms that no one is familiar with, or saying “this one” every five words. Sometimes pronunciation is all that matters, brake becomes bretch, and circle becomes sarcle. A cone nut might not look like an actual cone until someone tells you that is does. If you can’t understand what that someone is saying or don’t know what a ‘cone’ is, how many ‘this ones’ will you be able to file in your mind? Thankfully, everyone seems to understand that an enuti omubirikira kind of looks like an omubirikira.

A phrase favored by my father’s fifth grade math teacher places the burden on the listener:  “when they were handing out brains, you though they said trains, and buddy you missed it.”  Here in Bwindi, the burden is on me, the speaker. If I say cone, and they think I said phone, then no one is going to answer it.