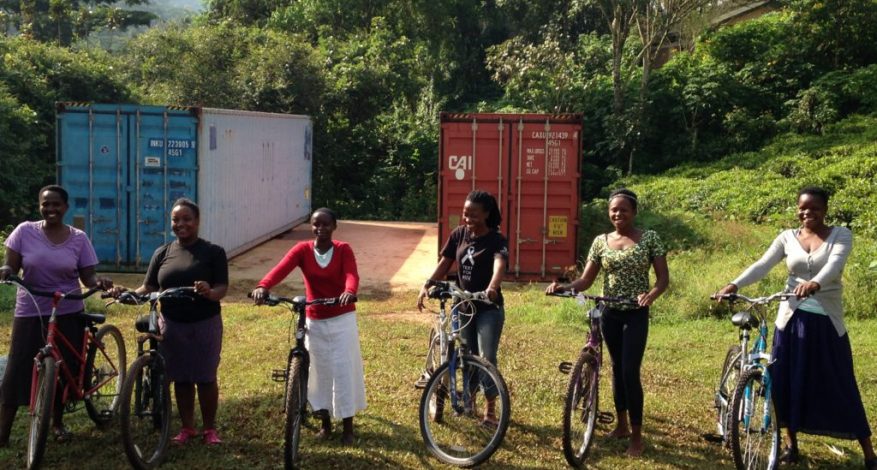 On the long flight to Uganda I reread King Leopold’s Ghost by Adam Hochschild. The book documents the tragic history of the Congo Free State, the personal colony of Leopold II King of the Belgians from 1885 – 1908. King Leopold made an incredible personal fortune, initially through the Ivory trade, later and more substantially through the harvest of wild rubber. He was able to profit during a short window between the industrial worlds realization of rubber’s value, and the maturation of cultivated rubber trees. In between, an extensive and murderous regime of forced labor was used to harvest wild rubber vines.

A few individuals in the history were of pertinence to Working Bikes. John Boyd Dunlap invented the first pneumatic rubber tire for his son’s tricycle in Ireland in 1887. William Henry Sheppard, an African American minister from Virginia, and early critic of Leopold’s regime, claimed to have been the first person to ride a bicycle in central Africa.

Two containers of bikes are sitting in a small valley. In one direction, Bwindi Impenetrable Forest National Park rises over the adjacent hillside. On the last leg of my arrival, in a 12 passenger Cessna with one propeller, I was able to take it a spectacular view of the forest interspersed with passing through three rain showers. From above, it resembled mountains made of broccoli blossoms. I marveled at the national park before wondering if in decades and centuries past, perhaps this entire region was as lush. This protected patch of 128 square miles are home to half of the worlds remaining population of mountain Gorillas. Over a hill in the other direction lies the Democratic Republic of the Congo.

Work on the bicycle program has not quite begun. I am still gathering supplies and being introduced to interested community members. Yesterday I sourced a tub of grease and two bottles of lite lubricating oil from the local hardware store, which was less than half the size of Working Bike’s stock room. We have secured access to a large storage room and shaded veranda in a building a few yards from the containers. I was able to bring two of each common bicycle specific tool in my baggage. An employee from Bwindi Community Hospital is in Kampala, the capitol city, purchasing non-bicycle specific tools today. They should arrive by bus on Friday. This afternoon I’ll continue my introductions, saw a few sheets of working bikes particle board to place over tables that are being temporarily loaned, and begin to get a few bikes in proper order. It is my understanding that our trainees likely do not know how to ride a bike. Learning to ride will be their first introduction to the project.

I’ve been met with both optimism and skepticism about how the project will work and if it can be sustainable. Factors I had not considered include a cultural reluctance for women to ride bicycles. The few flying pigeon style roadsters I’ve seen have been piloted by man. All of the women in the area are seen wearing skirts, so step thru frames may be of a particular advantage. During the mechanic training, our participants will not be paid, and may not be rewarded for some time, until the bikes can be sold. I’ve learned that during the training, lunch will have to be provided and arrangements are being made for a pot of beans to slow cook over embers each day. I’ve been told that Ugandans are entrepreneurial but that it is a society which prioritizes relationships. I’ve yet to meet the trainee mechanics but am beginning to understand that offering 28 days of technical instruction may not be well received unless the trainees are comfortable working together, with me, and understand that their investment in time and learning may not bear fruit for some weeks or longer.