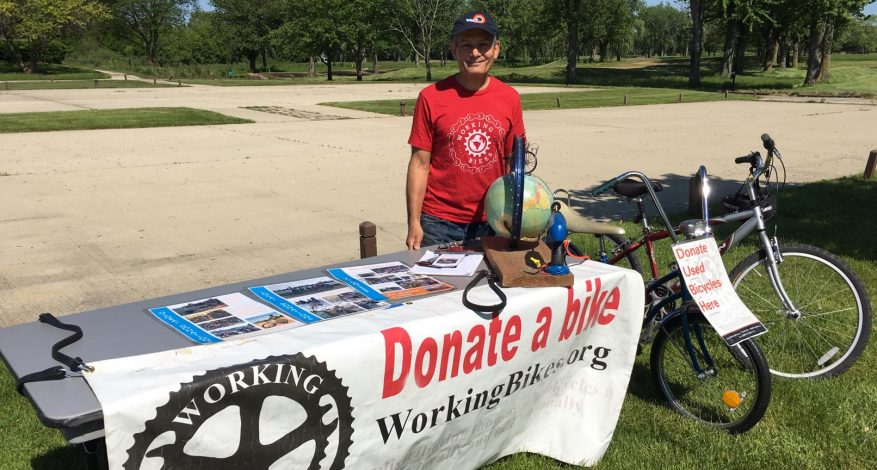 We are pleased to announce that the Working Bikes Board of Directors has named Phil Kaplan as its new President. Phil was selected at the March 13 meeting of the Board, after Working Bikes’ founder and former Board President Lee Ravenscroft stepped down.

Phil, formerly the Board’s Vice President, has volunteered at Working Bikes for five years and has been on the Board for two years. Prior to Working Bikes, Phil worked at the Environmental Protection Agency for thirty-plus years. He became involved with Working Bikes, as many volunteers have, after helping out at “shipping party.” Phil soon became a regular face at our volunteer bike repair sessions and at Working Bikes events. Today he is particularly active coordinating bike drives and donations in Chicago’s northern suburbs.

Lee has been President of the Board since its creation, several years after he and wife Amy Little began collecting bikes for donation out of their garage. Lee will continue to be active as President Emeritus, Board Member, head of our Shipping Committee, in-house bike machine engineer, and de facto Building Super. We hope that this change will allow him a bit more time for rest, relaxation, and trips to the Indiana dunes.

We are immeasurably thankful for the time and energy that Lee and Phil have devoted to Working Bikes over the years. They are both passionate and dedicated leaders, and we’re excited to see what the future holds.

Lee, above, helping to load bikes for CESTA in April 2014.